How hormones are affected by weight loss and fat storage…

This post may contain affiliate links, which means I may receive a commission, at no extra cost to you, if you make a purchase through a link. Please see my full disclosure https://thefitnessmink.com/contact for further information

I am are a participant in the Amazon Services LLC Associates Program, an affiliate advertising program designed to provide a means for me to earn fees by linking to Amazon.com and affiliated sites.

The hormone leptin is produced by fat cells.  Leptin reduces a person’s appetite by decreasing the urge to eat.  Leptin levels ten to be higher in obese people.  But despite having higher levels of leptin, people who are obese are not as sensitive to effects of leptin.  As a result, obese people tend to not feel full during and after a meal.

Insulin is important fore the regulation of carbs and fat metabolism.  In obese people, insulin signals are sometimes lost and tissues are no longer able to control glucose levels which leads to type II diabetes and metabolic syndrome.

Growth hormone, produced in the brain helps build bone and muscle.  It also affects ones metabolism.  Researchers have found that growth hormone levels in obese people are lower than those with normal weights.  Obesity is associated with low grad chronic inflammation within fat tissue.  Excessive fat storage leads to stress reactions within fat cells which leads to the release of pro-inflammatory factors from the fat cells themselves and immune cells within adipose tissue. 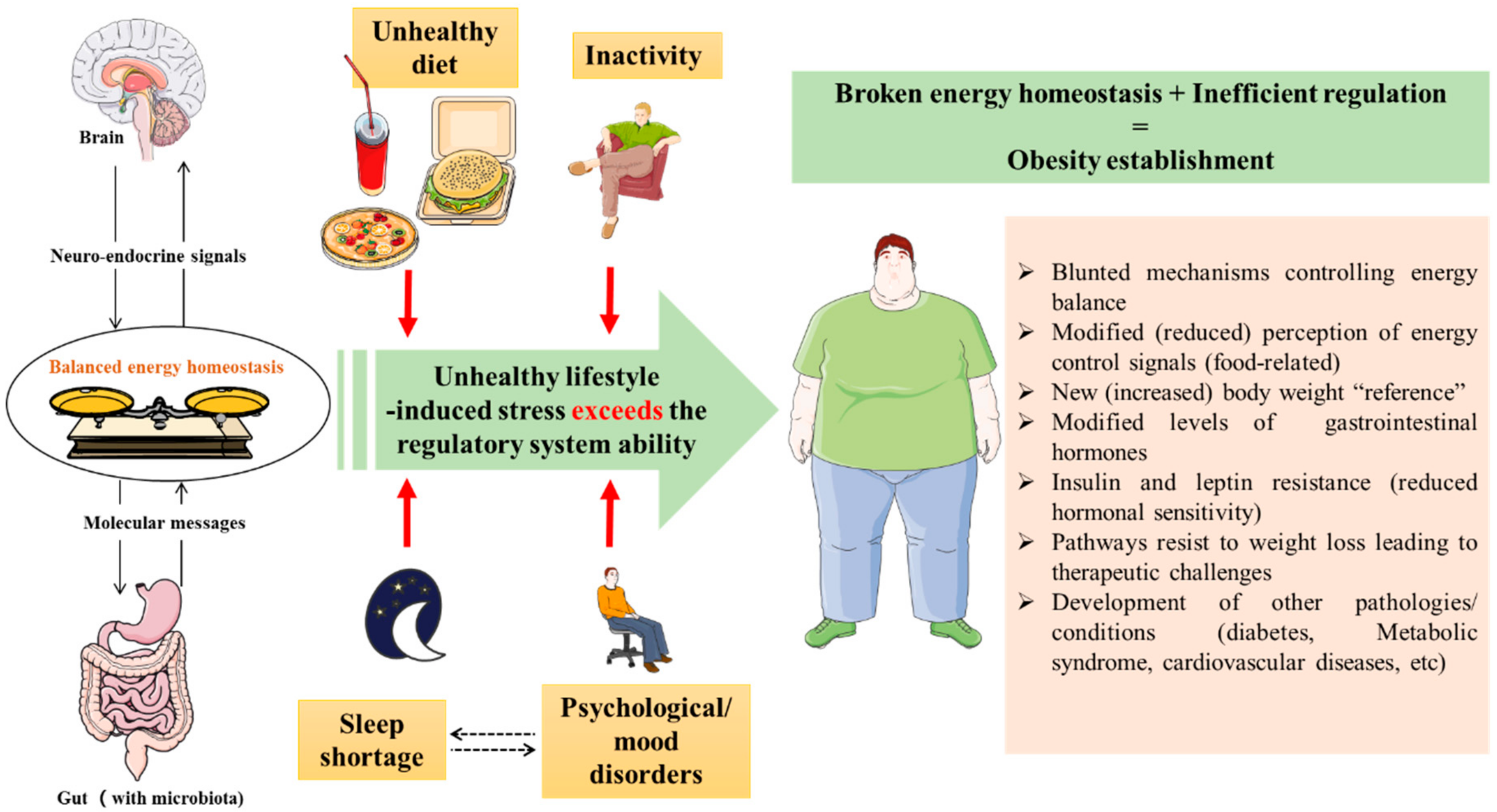 Obesity is also associated with cancers.  The increased production of oestrogens in fat of older obese women increase breast cancer risk.  Obese people have hormone levels that encourages the accumulation of body fat.  Behaviors like overeating and lack of exercise “reset” the processes that regulate appetite and body fat distribution to make a person more likely to gain weight.  The body is always trying to maintain balance so it resists any short-term disruptions such as crash dieting.  This is why crash and fad diets don’t work in the these people.  Its a process and takes time for your body to adjust.

Sex hormones also play an important role among obese people.  Ever notice how women or men going through puberty or menopause seem to gain weight? This is because during the time of these changes, sex hormones become imbalanced. Therefore, weight can increase. What can be seen from this is the clear sign that if your sex hormones are not getting secreted in the right quantity, chances of becoming obese are high.

Thyroid deficiency is a condition where the abnormal low production of thyroid hormone or hypothyroidism slows down the body’s metabolism.

General symptoms are like sudden weight gain, fatigue, dry skin, etc. Studies show that the weight that is gained due to hypothyroidism is difficult to lose.

This deficiency is more prevalent in women and hence weight gain due to hypothyroidism is very common in them.

It is the sex hormone that may cause weight gain in women.

During menopause, the low level of estrogen makes the body use starches and blood sugar effectively. This results in more storage of fat and hence gaining weight.

Also, not only during menopause, if generally, the estrogen levels in women become too little or too high or the ratio of estrogen and progesterone deflects from normal, women seem to be gaining weight particularly in the mid-section, thighs, and hip areas.

Again during the halting of menses in women, the progesterone level decreases too. And this although doesn’t make women gain weight, It leads to water retention and bloating. These, in turn, make the body feel heavier and full.

Yes, we all are aware that this is a male hormone. However, in many women, testosterone level roars up and becomes one of the reasons for weight gain in women.

This condition is elaborately known as Polycystic Ovarian Syndrome (PCOS). PCOS is one of the causes of hormonal imbalance in females that is often accompanied by appearances of facial hair, acne, infertility, etc.

This hormone is the primary stress hormone. Lack of sleep or anxiety can cause the production of cortisol in the blood. Whenever you are stressing out, your body releases cortisol that holds on to the visceral fat of your body.

It is a way that cortisol prepares your body for danger times and thence makes you gain weight. Also, during stress, the craving for sweet is caused by cortisol too, all the more reason to gain weight.

Popularly known as the hunger hormone, it is produced in the stomach. This hormone signals the brain that we’re hungry.

Our body is amazingly adapted with ghrelin, that’s why we always keep getting the “I’m hungry” signals from ghrelin. But studies show that with proper exercises, ghrelin levels can be decreased. This ghrelin low level becomes a prime factor in fat loss.

Moreover, insulin imbalance increases the secretion of the stress hormone, cortisol, which as mentioned is responsible for weight gain.

The weight Loss Hormones are

Popularly known as the ‘satiety hormone’, plays a major role in reducing hunger. It basically functions opposite to ghrelin as it decreases the appetite.

It is released from the fat cells in your body.  The leptin hormone inhibits hunger. More the body fat more is the release of leptin. However, it is found that excessive body fat leads to too much of leptin- a condition called leptin resistance. To combat this and to keep your leptin levels optimized, go for antioxidant-rich foods.

The leaner you are, the more adiponectin is released in your fat cells. It basically betters the ability of your muscles to use carbohydrates for energy. This boosts the metabolism of the body and thereby elevates the level of breaking down of your body fats. This is an important weight-loss hormone that can be optimized by making you become leaner.

It acts opposite to insulin and is responsible for breaking down of stored fats and carbohydrates.

You can maximize glucagon’s level by including diet which is protein rich and low in carbohydrate. But do not go for any zero carb diet ever.

On consumption of protein or fats, your intestinal cells release a hormone called Cholecystokinin. It is one of the most important hormones responsible for weight loss. It signals your brain to turn over the satiety level and it also slows down the digestion. Thus you will feel fuller and eat less. To maximize it, you should always include protein and fat in your diet.

These hormones promote breaking down of the fats that are stored and to burn to release energy. Some high-intensity exercises can increase this weight-loss hormone.

This is a fat burning hormone that enhances the burning of fat to release energy. It is also responsible for the suppression of appetite. And thereby it promotes eating less.